The EU and the Coronavirus Pandemic 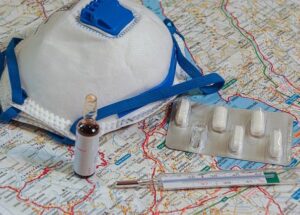 Coronavirus in Italy image via Pixabay

EXECUTIVE SUMMARY: The coronavirus pandemic has exposed many of the EU’s inherent weaknesses, from its total unpreparedness for the crisis, to the open borders that expedited the spread of the disease, to the lack of solidarity reflected in member states’ refusal to help Italy in the initial critical phase of the pandemic. The union cooperates well in non-crisis situations, but its complacency, lumbering bureaucracy, and sluggish decision-making processes hamper its ability to respond to urgent developments.

The coronavirus epidemic has exposed the EU’s gravest flaws. It failed to make plans for state cooperation to combat an epidemic, should one arise. The Union’s open border policy in accordance with the Schengen Agreement, which it considers its cardinal achievement, has turned out to be a major hindrance to the effort to contain the virus. The Union refused to suspend the Schengen Agreement even as the virus rapidly picked up momentum and minimized the dangers of the pandemic to the general public, missteps with grave human costs.

Europeans, often rightly critical of China’s human rights abuses and fearful of Beijing’s burgeoning economic strength, strongly criticized the fierce and undemocratic steps the People’s Republic took in the fight against coronavirus. But they failed to internalize the lessons learned from the human toll of the virus among Chinese citizens and its rapid spread to other Asian countries. Instead the EU pointed to China as an example that would not be followed by enlightened and progressive Europe.

When the virus spread to Italy, several EU countries responded by criticizing Italy for having become a viral hub while refusing to close their own borders with that country, a step that could have curbed the spread of the epidemic across Europe. It was the Chinese and the Russians, not the EU, who supplied desperately needed equipment to fight the plague in Italy. The Chinese also delivered equipment to Spain and France, which soon followed Italy into the heart of the crisis.

It is interesting to note that, in contrast to its non-response to Italy, the Union provided around 20 tons of aid to China as it struggled with coronavirus. It is not yet clear whether this marks a tightening of diplomatic relations between Europe and China to compensate for Europe’s worsening relationship with the US.

Europe’s complacency about the deteriorating situation in Italy was evident in the conduct of many Union countries. In France, for example, mass events took place at the annual agricultural fair in Port de Versailles, which opened on February 22 and continued even after the virus had appeared across the continent. President Macron attended the opening of the fair, where he was surrounded by crowds and talked to people with no apparent concern about either receiving or transmitting the virus. On March 6, Macron and an entourage visited a nursing home to announce a ban on visiting nursing homes—the irony compounded by neither the president nor his entourage taking even elementary precautions while at the site.

On the same day, the governor of the Haute-Rhine district in eastern France held a press conference attended by experts, senior province officials, and health authorities announcing new limitations on public gatherings, closures of educational institutions, and banning of visits to nursing homes. During the meeting, the speakers handed the microphone back and forth in violation of the very precautions they were discussing. Local government elections in France were held as scheduled on March 5, although the second round, which was scheduled for March 22, was canceled due to the rapid spread of the epidemic.

The EU gradually began to internalize the danger of coronavirus as it surged across the continent. On March 6, a special conference on coronavirus was held at the Union Health Ministers’ Forum, where it was decided that the states would cooperate and exchange information on the crisis. On March 17, European Commission president Ursula von der Leyen acknowledged that the EU had underestimated the danger and declared the Union closed to citizens of non-European countries. Some EU member states, such as Spain, Denmark, and the Czech Republic, announced a total closure of their borders.

The EU has achieved considerable gains, mainly on economic issues, during non-crisis periods, but it has failed more than once to deal with crisis situations. Over the years, the Union has grown to include 28 member states and has gradually increased areas of integration across many spheres, including foreign policy and security. As a result, the EU has become a cumbersome bureaucratic body with a slow decision-making system that does not match the dynamic pace of events in the global arena or, for that matter, the domestic arenas of the member states. Unanimous decisions are required on key issues, including emergency situations, which makes action slow and difficult.

The EU’s handling of the massive refugee problem, for example, highlighted differences of opinion among its members that would ultimately have implications for the coronavirus pandemic. Eastern European countries such as Hungary and Poland initially balked at receiving refugees. In 2016, the Union reached an agreement with Turkey according to which Ankara would stem the influx of refugees in exchange for financial aid and the Union consented to receive refugees under certain conditions. The EU complied with this agreement, sending Turkey about €6 billion, but Ankara recently allowed refugees to reach the Greek border on the pretext that the Union had breached the agreement.

The Union has essentially put itself in the position of being extorted by Turkey. Greece has had to deal with this latest flood of refugees alone, a surge that was intensified by the recent military offensive in Idlib. This situation, which would be difficult even under relatively normal circumstances, could be dramatically more damaging for the Greek islands as it could lead to a broader local outbreak of coronavirus. Lesbos, for example, is crowded with refugees.

In recent years, the EU has faced harsh internal criticism from Euroskeptic parties in addition to challenging developments such as Brexit and a weakening of German-French cooperation, which has for years been the main engine for deepening and expanding European integration. The coronavirus pandemic should clarify for Europe that it has dangerous flaws that must be corrected so it can cope with global crises.

Dr. Tsilla Hershco is a senior research associate at the Begin-Sadat (BESA) Center for Strategic Studies and a member of the Israeli Association for the Study of the European Integration (IASEI).

Source: The EU and the Coronavirus Pandemic